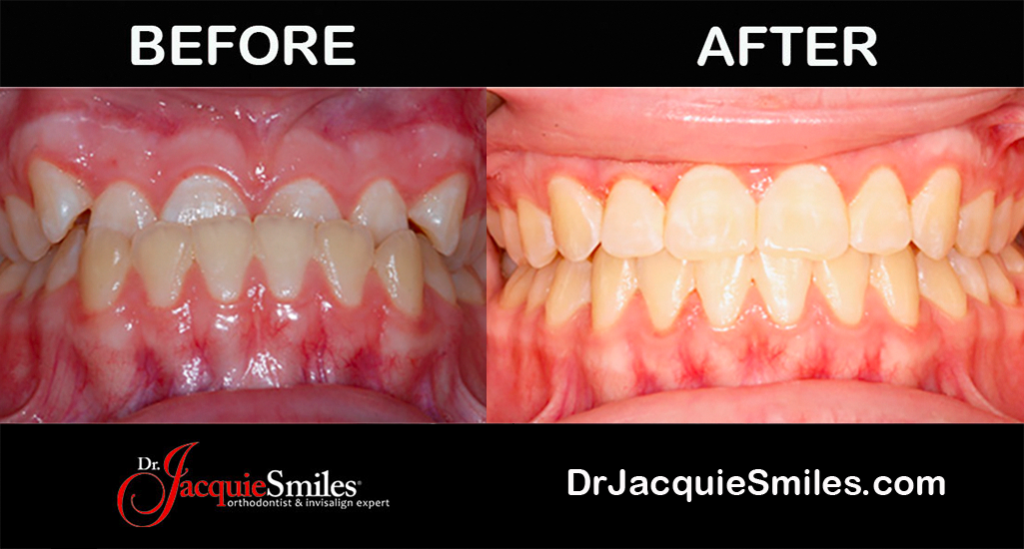 The craziest thing about Invisalign is that it makes your teeth move. The next craziest thing about Invisalign is that wearing your trays requires little to no outside supervision. Once I had my attachments, I had 12 weeks of wearing them without one appointment to see Dr. Jacquie. Imagine that? How well Invisalign works (and how quickly) is completely dependent on you and how much you behave (or misbehave). When I had braces, I made frequent visits to the dentist, for cleaning, tightening, rubber-band changing. This time, the straightening of my teeth was entirely up to me. I would not say Iam the model patient, I definitely have been taking plenty of liberties with my wear-time, but it feels strangely good to know that if my next trays donâ€™t fit, itis my fault. The truth is, it is better to behave, but there is room to misbehave. I like that about Invisalign. I imagine everyone likes that about Invisalign.

(I really hope my next trays fit.)

Iam not sure what straight teeth deities are looking after me but somehow, despite my less-than-stellar behavior with my trays (some people need supervision!), the sixth installment of my trays went on no problem. Thank you, straight tooth fairies.

However, I have a headache. It hurts. Itis either the sun (hello, heat wave) or my trays. Perhaps the gods that have allowed me to get this far in my treatment are reminding me that there are consequences to my actions, and while my trays are fitting, they are going to be tight if I choose not to wear them 22 hours a day.

When I first got my trays I was told to bring the case they came with everywhere. That temporarily storing my trays in paper towels was not a good idea, as many, many people have accidentally thrown them out. But no one told me how easy and practical and convenient a homemade paper towel Invisalign container is, especially when you are in the kitchen, and about to eat. Just pop them into a napkin or paper towel, season and taste your food, and enjoy your meal. The trick is remembering that the paper towels are not garbage, and should not be put in the garbage.

Fast forward an hour: I threw my trays out, accidentally, after reminding myself while cleaning the kitchen NOT to throw that particular wad of paper towels out, as my trays were in them. Fortunately, they were tossed at the very end of my cleaning routine and were easily retrieved from the trash but LESSON LEARNED. Use your case!

I still do not use my case. I leave my trays in so many random places (on the bedroom windowsill, in the linen closet, in my boyfriend s glove compartment) and not-so-random places (in the bathroom vanity, next to my toothbrush; on the bathroom sink, next to my toothpaste) that I lose them all the time. I do not actually lose them, it just takes me longer to find them then say, if I USED MY CASE. But there is always that quick sensation of panic, the I lost my trays, what am I going to do? moment, that really is not worth it. So use your case! The relief you feel after going through your friend s garbage only to realize you put your aligners in your laptop bag is so not worth the coffee grounds now stuck under your fingernails.